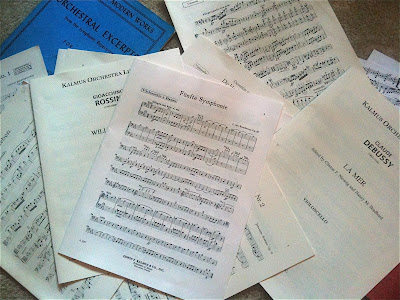 I’m taking some auditions around town in a month or two, so that means more than ever, routine and repetition rule my life. I love it: the sense of purpose and direction, the hours that seem to disappear, the wondering what passers-by must think about the disembodied strains of Don Juan escaping from under my door, despite a practice mute. DJ is an acquired taste, but the part played alone has a really weird sound to it, like a series of showy spasms and hiccups with just enough filler and rests to take you off of your game for maximum surprise when the brass comes in an eighth note before the strings do.

The past year has been very limited when it comes to performing in an orchestral setting. Mostly, I was working as a ringer with some really good amateur orchestras to give them courage from the back of the section during Beethoven and Brahms and the like. It was perfect, actually: I was unsure of how my post-op elbow would hold up under duress, and these were fairly innocuous crucibles to test my facility.

The recording gigs came back as soon as I could accept them, and by April, I was bouncing around greater Los Angeles putting down tracks for TV and the odd indie film. I returned to seriously hard repertoire with my goofy Dvorak video series, and I was working one Popper étude a week until a few days before the move. Now that I’m here and beginning to find friends and networking allies, the gigs are starting to pick up and it is safe to say that I’m at full strength. On an average day, I put in about 3 hours when I’m preparing for an audition. For those of you who are interested in this sort of thing, here’s the regimen, which is usually in two 90-minute chunks with a few stretching breaks thrown in.

1) No scale to warm up, instead I play whatever vexes me most (right now it’s Beethoven 5 and Smetana) in über slo-mo. Maybe I’ll slur 2. I hold each note until I feel like I’ve experienced it, felt it securely, settled into it and considered the following note. Then I move to the next one. I probably do this for about 10 minutes, or until I feel like I’ve made some progress.

2) Every week gets a section of the first movement of Haydn D. This week I was looking at the second page, which in my Schott/Gendron edition starts on that C#. It’s lyrical, all on the G string, where my cello does not need much coaxing to sound really lame. I play for spirit, intention, intonation, all at once. This piece is part of my DNA: Andrew Cook told me that it was going to be my “war horse”, and it is. Yet there is so much care and attention needed all the time. I think that may be what keeps me interested. It’s never done. It always requires every ounce of my effort, and even then it does not always reward me for it. More repetition, more, more, more.

3) I’ll pick an excerpt, possibly one I have not favored over the past few days, and work it. I play it at a medium tempo, with a metronome, then without, then record myself to see if I’m doing weird things. I work on any accidental surges in volume or rough bow changes or audible shifts I detect, and then play along with the recording: A LOT. Many many times. I like Bernstein,  Boulez, and Von Karajan, because between them they offer me nearly everything one could expect in terms of tempi and interpretation, and if I’ve never played a piece with an orchestra (the case with The Bartered Bride, which I have somehow missed) I at least have a classic archetype to draw from.

4) By this point, I’m noticing something that’s bothering me. So I haul out a Galamian style scale and I work that element. Lately, it’s been vibrato speed and coming into the frog on long up bow slurs. So I’ll play only up bows, only slurs, and hold random notes to check the speed of the vibrato. Then I take a break. Usually coffee, though Scotch is more tempting depending on how the day is going.

5) I come back and either run the Don Juan or the first page of Haydn. I spot work, and I’m done for the moment. The second session, which is usually after a meal or a good long break (at least 2 hours) is just like the first, and I’ll listen to my guts to decide whether I should rehash the excerpts I was working on earlier or try something else. Also, I work the first phrase of Haydn an extraordinary number of times. I mean, I work it all, but bungling the first thing out of the gate is something I do not intend to do if I can help it. A strong opening statement with a few nerves requires more practice!

And so goes my life, for the next two months. Heavenly.

Whoa. Did I just write about cello on my cello blog? What is up with that?

Report from the field