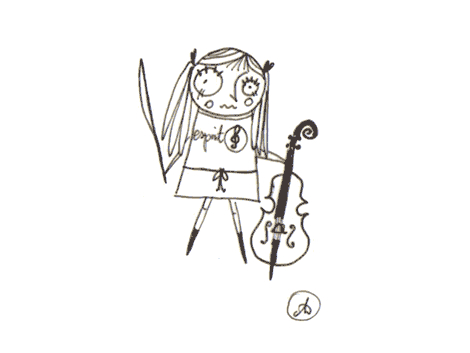 So I love playing with bands. Love, love, love it. Every now and again, a songwriter will come to me with some ideas or even a written chart for a tune. And I play it. No sweat. Where we enter the danger zone is when I come on board as a meta-member of the band. I rehearse. I do a gig or three. They know they want cello-y sound here and there, and after that, it’s anyone’s call.

What I find is that while I can play over nearly anything, sometimes songs don’t really need more than what’s already there, especially if the thing is sparse. My aim is to be a part of the song, not a distraction from it. Take this song, by Bon Iver:

This is perfection. Save cello for another moment. As it stands, the solitary guitar starves the listener between vocals, offering no comfort, just space, and builds anticipation for what he might have to say next. This approach works for everyone, because when you do incorporate the cello, or the accordion, or whatever, it will be special. If you’re like RaRa Riot and write songs with string players as permanent fixtures of your sound, then great. It’s a different expectation, and less prone to busy-making and noodling.

I write this because I rehearsed with Ben today in preparation for our show on Friday, and his laid-back inclinations are to have cello all over the place, partly because he’s open to collaboration, and partly because he’s a very easy going guy. After listening to some rough recordings I made of our previous rehearsal, I thought it might be better to sit out a song or two and scale back some of my wafflings on the other tunes. Of course he agreed: he is as agreeable as they come. I’m just hoping that these choices give his amazing songs the space they deserve, and that what I contribute sits in the song rather than on top of it.

PS: Cool cello girl illustration from TheGoodMoodFactory. I like just about everything she does.