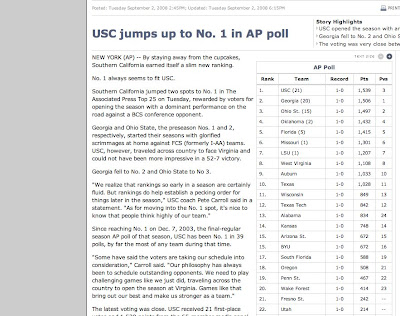 For those of you who are not immersed in the world of college football like I am, this might seem like cause to celebrate. Ooh lookee! My team is rated #1! No, no, no! Stop! We have a bye week this Saturday (no game) and then face a mighty opponent in Ohio State, who is now all angry because they’re not in that #1 spot. And if you knew how they got that number, you might not even feel like putting much stock in it anyway.

The BCS (Bowl Championship Series), along with AP and Coaches’ polls, determines a lot about what the season looks like for many of the top teams. The system is so flawed, so steeped in voodoo and complicated math, that I don’t want any part of it until the 4th or 5th game of the season. Even then, it has caused such heartbreak and bloviating that I see it as a big black eye on NCAA athletics.

You know I love college ball, and especially USC ball. They don’t put names on the backs of jerseys, because you are your team, your position. You get penalized if you celebrate like a jackass in the end zone; just hand the ball to the ref and get off the field for special teams. Last season, to commemorate the terrible loss of Mario Danelo, Pete Carroll took a delay of game penalty and sent the kicking team onto the field without a kicker, the position Danelo had played. Other teams in similar situations pay moving tribute, like Tennessee did on Monday. These guys are in a critical phase of life where natural male aggression and ambition can as easily slide into violence/aimlessness as it can productivity/respect. They go to extraordinary lengths to make sure these are college athletes. I remember seeing two different guys being tailed to each class, later finding out that the person tailing them was their tutor. Some would complain that there are plenty of students who can’t afford a tutor, or that these guys get the royal treatment because of the glory they bring their school. What people are missing, especially in schools that recruit well, is that there is a line out the door of guys waiting to fill their shoes. Pete Carroll is not the only coach charged with making sure that these young men recieve an education, above all. Football is just a 5 month metaphor for character building, and most guys, even out of USC, Ohio State, Florida, etc won’t play in the NFL, and the coaches know it. And that’s why I love it. It’s like one of those intricate mandalas the Tibetan monks make: weeks of placing grains of sand, and then upon completion, they run their hands through it to highlight the impermanence of everything, that all we have is experience.

Back to the BCS. One of my many objections to it is that 5 different teams can go undefeated, and yet it’s largely up to some secret computer to determine which two compete for the championship. It’s not like the pros, where there are this perfect number of teams and the cream literally rises to the top by virtue of their record. NCAA division 1 football has too many teams, and would need a year round season (ok by me) in order for all of the relevant teams to meet each other to determine a true #1. The underbelly of that means chasing the computer rankings becomes the obsession, rather than the experience of being a collegiate athlete. Pete Carroll agrees with the monks and their mandala. Each game is fresh and completely impermanent. Of course, that sort of mindset leads to the material spoils of the game: championship trophies, Heismans, accolades and NFL contracts for some of the lucky few.

So USC is number 1 for me. But then again, I thought the same when Paul Hackett was painfully steering us into 6 and 6 and the Bruins had their way with us more times than I would like to remember. It’s the spirit of the team, of the institution, the effort, that I am attached to. Ohio State is a formidable foe, but win or lose, I feel lucky to be a part of a rating system that has nothing to do with a computer or a bunch of biased sports reporters.

As a side note, I would give the BCS a C- for effort, based on my system.