Next Book: The First Hour by Amit Peled 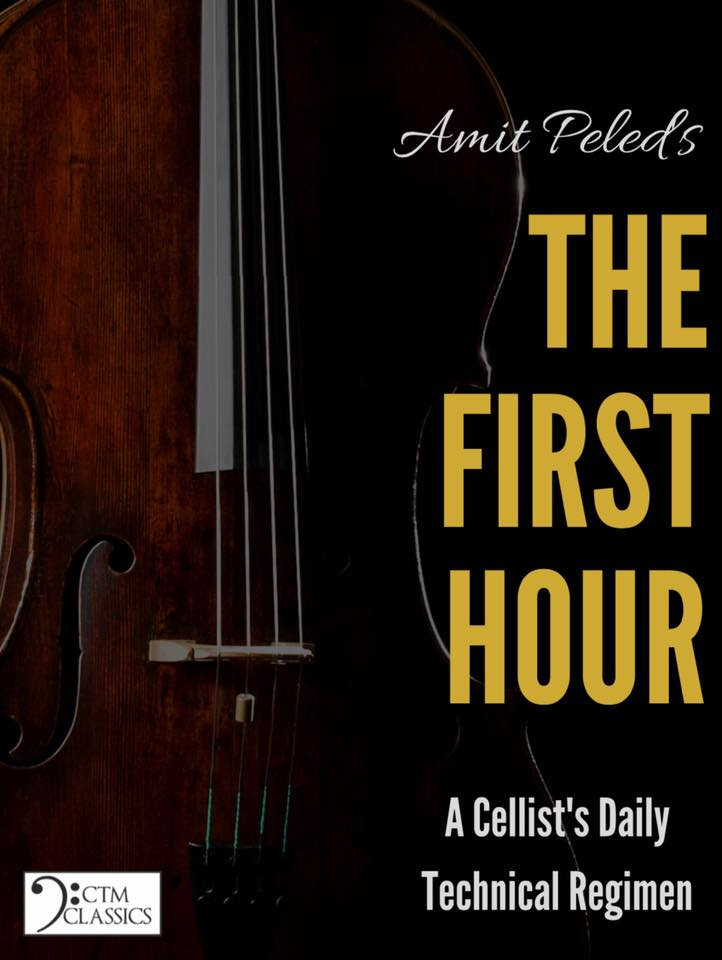 What a wild couple months it’s been around here! Tamarack Arts launched, a semester culminated, new students onboarding, some students moving on…but the year of professional development continues! For July, I’m going to be writing about (and doing a podcast discussing) Amit Peled’s fabulous text The First Hour: A Cellist’s Daily Technical Regimen.

This book was something I’d seen around—you probably have, too—but I only bought it after taking a lesson with Amit, myself. What a wonderful teacher! It’s so nice to have an objective, compassionate expert look at my playing after all of these years on my own. My main goal was to dissect a bit of thumb position technique, specifically double stops between 3 and 1 in an extended position. This has never been comfortable for me in 5th, 6th, and 7th positions, and I just couldn’t make it work where it was resonant and physically viable. I demonstrated my problem.

I nearly died. Three decades thinking I was just not ever going to get those few measures in Popper 9 and 13! So that was great. I think I needed to hear it from a master pedagogue: so much of Popper is about the fingerings, and I already have to fight impostor syndrome on bits of the Hohe Schule I hadn’t previously studied at music school.

With that issue resolved, we had 50 minutes of lesson left, and I asked him to look at my vibrato, and see if there were other things that could use adjustment. One of my dearest colleagues out here is one of his star students, and I’ve been enamored of her vibrato, especially in high positions, for YEARS. He acknowledged that she is just really special (awwww) but offered a little tweak in my technique to get me a little closer to her wildly expressive wobble. We also did some thumb position double-stop mapping and took the time to make sure I wasn’t going to re-injure myself as I venture back into a professional level practice routine with the new repertoire I’m working through. (note: Prokofiev is complete; now onto the Barber sonata!)

Much of the work we did focused on the confidence the hand can move with when you have definite ideas about the spacing of the fingers during double stops, the intervals both fingers have to move when we do, say, a scale, and then saying the names of the notes. So many professionals, rightly, read more intervallically: aka, we judge pitches by their relative distances to each other rather that go though the decoding process of letter-naming. This works in so many contexts, especially sight reading. But it does start to fall apart when doing complex things like thumb position double stops of varying major and minor shape. When there are even tiny questions about where you are and the distance you have to move to get to the next thing, intonation can suffer- and a sense of anxiety/tension creeps in. Hello, old friend! This, I know so well.

In my lesson, we did some exercises from the middle chunk of The First Hour, which I ordered, waited for excitedly like a turbo nerd, and began practicing from it daily as soon as I tore open the envelope it came in. I immediately started sharing select exercises with my students, who have already benefited from the unique way Peled presents the fundamentals of advanced technique.

Next post will be a brief summary of his thoughtful and light-hearted language of “cello emoji” and some of the most important ideas he presents in TFH. With any luck, there will be an accompanying podcast episode. I’ll let this post simmer a few days, while I submit some new stuff for Strings and see if any questions about the book float in, either here or my inbox.

Oh, and here’s Piatigorsky playing the Barber. The old recording strains to capture his tone, but the artistic gesture is clear. What a master. One of the original voices of modern cello sound.