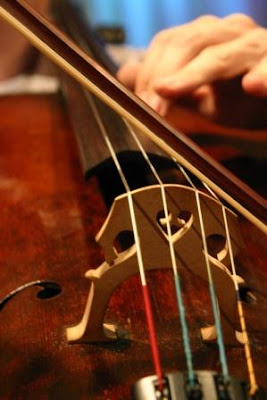 I have a relatively new student (13-ish, taking for about 6 months) who reminds me very much of myself at that age. H has a lot of energy, natural ability, and a tough time settling into lessons. Don’t get me wrong; she’s bright. In fact, she is so good at identifying concepts that she frequently finishes my sentences and then cites an anecdotal example to prove it. While perhaps entertaining, this voracious appetite for new information does not mean she applies the new concepts to her playing. In fact, it can hinder actual progress because her mind is too busy spinning the wheels to do much of anything else.

From our first lesson, I had two chief complaints: her thumbs were crushing both her bow and the neck of the cello, and please stop playing on the fingerboard. Over and over again, I issue requests, suggestions, rhetorical questions, even orders, to do this. On Saturday, she unpacked her cello and much to my dismay, the telltale rosin was caked in a 3 inch swath up onto her fingerboard. I tell all of my students that while professional cellists can and do play in these northerly locales, it’s better to play between the bridge and fingerboard. I tell them, “This is where tone lives. Only play where tone lives.”

Before she could even sit down, I asked her what she thought I was going to complain about. I think I saw her check her fingernail length before I spun her cello around and pointed to the white disaster on her strings. Because she takes criticism on the chin, she shrugged and said something to the effect of “Yeah, I need to work on that.”

“When is a good time to take my advice?”

“How long are you going to wait and what is it going to take for you to make this improvement? If you don’t want to improve, then keep playing up there.”

I won’t say that her eyes welled up, but the weather in the studio changed. Sure, she can take criticism well, but she wasn’t taking my critique and using it, she was using her survival instincts and deflecting it. Finally, with some pretty brutal honesty and a more stark line between teacher and student, she got it. I wiped the rosin off of her cello and said, “Let’s see if we can do better today.”

At the end of a good (but quiet) lesson, I told her that I didn’t mean to be unkind, and that life is short and cello is hard. My advice is only so she can improve, but she has to take every bit of counsel and implement it with the same intensity she lives the rest of her life with. She relaxed a little, and said that she understood, but I have had the “slap upside the head” lesson with many students who then don’t return, and that was a little glowing ember in the fire as I watched her leave.

I got a text from her dad later in the day saying that H had gotten a lot from the lesson, and that they’ll see me next week.

I am impressed. It takes a rare combination of character and soul for a teen to take criticism, feel its impact, run with it, and have the good nature to smile all the while. I don’t like to draw the sword very often, but it hurts me a little less when I see that it does its job well.