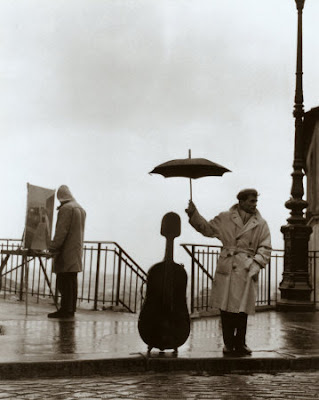 I have a policy in my studio of never accepting a student who cancels their first lesson. What a meanie, right? And yet, the few times in the past when I have caved into the pressure to be amenable, I have regretted it.

The torrential rains of last month were a fantastic gauntlet for my students and me. We braved the flooding canyons and closed streets, but mostly it was the cell-phone SUV Distracto-Moms that plague even the mildest LA day that proved most exciting. Sodden cellists splashed their way to me in the afternoon, and I zig zagged up Beverly Glen to my housecall in the height of the downpour. I was a little bit late, but I told them I might be: all was well.

There are patterns I recognize in student behavior: when I calculate, I have taught over 700 people. I would say that’s enough to hone instincts, especially since half of those people bailed on, before, or right after their first lesson. These patterns are what form my policies and encourage me to enforce them, so when a woman called me two days in a row to leave insistent voicemails about how serious she was about learning the cello, the red flags started going up.

I already have another post in the works called “Show and Tell”, about the most difficult students I deal with: those who need to tell me about how little ego they have, how they want me to be hard on them, how serious they are about the cello. After about ten minutes of their ridiculous spew, I ask them how their scale went or want to hear their piece, and it’s clear that they have not done any substantive work. These people always initially contact me with a series of intense emails or voicemail, just like Woman X did about three weeks ago.

Woman X wanted me to know she was an artist. Woman X has a very busy schedule. Woman X and I made an appointment for an afternoon two weeks in the future. I always send emails to my new students, and then especially before an initial lesson, email or call to confirm. Yes, yes, said Woman X, I’ll be there. Our lesson was scheduled for 1:30. At 11am, my phone rings, and I knew it! Red flag=confirmed. She wanted to cancel the lesson because she expected traffic because of the rain.

Wow. LA? Traffic? I have never heard of that.

I offered her a little flexibility and asked about other times. Woman X has a busy schedule. She could not. She also did not offer to compensate me for my time, which is supremely disrespectful. Generally when people offer, I rarely accept because the offer is an indicator they understand the nature of the exchange. That they are my clients, that I do not work for them, but rather along with them.

So I told her that I don’t accept ongoing students who cancel their first lesson, especially at the last minute. Woman X was outraged. Of course, the more someone throws a temper-tantrum, the more secure I feel in enforcing my policy. You see, it’s part of a pattern. People like that are always three things:

1) Not dedicated. They want to appear as if they are cellists, not actually be cello students.

2) Notorious cancelers. And they always force the indelicate fight about the 24 hour policy.

3) Not worth my time. For every hour these bozos pollute my calendar, my amazing crop of students has less flexibility in their own scheduling. As strict as I am with this policy, I am accommodating of the people who show dedication and respect for me, for the process, and for themselves.

So I don’t take students who cancel their first lesson. It never works out well when I have. And incidentally: when it rains, I leave the house a full hour earlier than I normally would if the lesson is more than 3 miles away. Because that’s what you do when you’re dedicated to holding up your end of the bargain.