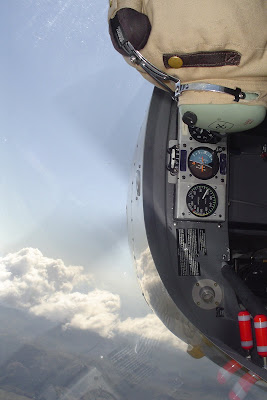 Many of you know that I am an aviation enthusiast and so-called student pilot. In truth, although I come from a family peppered with pilots and have spent many hours “flying” (from the right side of a dual-yoke plane), I have not commenced my studies in earnest. Hangar flying and planespotting do not count.

That’s because my teacher doesn’t want to teach me. He’s a busy guy and like most big-name teachers, he probably doesn’t do too much entry-level instruction. In fact, the only thing that makes him my teacher is the determination I have to make it so.

I’m not sure if it goes like this in the real Jewish world (as opposed to that pesky fake one), but there was a SATC episode where Charlotte goes to the temple to enroll in conversion classes and the rabbi closes the door on her repeatedly. It was later explained that it is a tradition designed to test the will of the person wanting to convert, to separate the converts of convenience from the people who understand the seriousness of the gesture.

As someone who loves teaching and understands the link between teacher devotion and student success, I wonder if something similar is happening in my correspondence with this instructor. I emailed once, and got a “Thanks, great. Not taking new students” message in reply.(Foo!) I am lucky to have gotten a response, as he is probably the best-known and most sought after flight instructor in the US. It’s like calling Janos Starker or Ralph Kirschbaum and asking to be taught what the open strings on the cello are. I know. But I also know that some of the instructors I have spoken to treat teaching like a liability, or something to get them to their commercial pilot certificate. It’s something they would rather not do if they had a choice.

The thing about initial flight lessons, or initial anything lessons, is that the fundamentals learned there make a deep impressions, and tend to be a reference for everything that follows. That reference can help you stay in tune on the cello, but in a plane, it can help you stay alive. This guy has a gift for articulating the potentially bone-dry basics of aviation, and I am more inclined to pursue lessons with someone who isn’t silently rolling their eyes at the indignity of having to do anything other than live the exciting life of a top-secret Rockwell test pilot and man about town.

So back to the temple. L is an instrument rated pilot, and when he was looking for an instructor to get him there, he was given the name of the FAA examiner down here as the best guy to call for lessons. Over the course of many months and phone volleys, he was basically told to bark up some other tree. He’s a real guy, who doesn’t do that LA thing where they pretend to like you even though they don’t know you from Adam. He was curt, and busy, and had no room in his schedule until the end of time for the likes of L. Until the umpteenth call. Then there was a hole in the schedule, just like that. Was the instructor just trying to weed out the scoffers who wanted to brag about being able to fly IFR? All I know is that he and this guy continue to have a very fruitful relationship, and that if L had given up after a few rejections, that would not be the case.

So my quest continues. I have to lay low until Oskosh is over. It’s not fair to hassle someone who lives a life in aviation around the biggest aviation week of the year. I want to be careful and thread the needle between determination and weirdness. I can’t say that I would be eager to take on a student of the opposite sex who would not take no for an answer. The internet is a strange place. But somehow I have to demonstrate that I am only interested in the end result: a set of fundamentals, taught by an expert teacher. After that, I’ll be a better student for the next guy, even if he/she is only there to get some hours.

3 thoughts on “finding the right teacher”