The only thing† worse than having anxiety about something is the clarity of hindsight when you realize how much time you’ve spend senselessly worrying. As a former procrastinator who paid dearly for her dithering, I made a switch many years ago to something of the opposite extreme. I am now an ultra preparer. My move, which should culminate in the receipt of my belongings later today, has been on the books since March 30. Call me for a gig and I’m there an hour before the early birds. I like to put up Halloween decorations on October 1. I’m halfway through Dr. Hardiman’s text for the class that begins tomorrow.

I do this stuff because I assume things are going to go wrong, or that I’ll need extra time, or something else will come up at the last minute. At first, this kind of over-preparing served me well. It was refreshing not to worry so much, and to have a clear picture of what the days/weeks/months ahead would look like. Security eventually began to give way to anxiety, though: I had glimpsed what I thought was control, and I wanted more of it.

With some help from Pema, yoga, and good old fashioned getting older, I’m now much less prone to worry loops, although I still have my moments. One of these moments came recently, surrounding my well documented moving debacle. Over and over, I retraced the mistakes on the part of the company, recalled the salesman’s unprofessionalism, pined for the comforts of my belongings, wished I had done something differently. My stomach stewed, I had nightmares, I cried into a glass of Cab Franc, which was actually a mug, because that’s all I have to drink out of.

Suddenly a pie chart flashed before my eyes. I imagined myself in the last moments before death, being shown a diagram of how I spent my life. 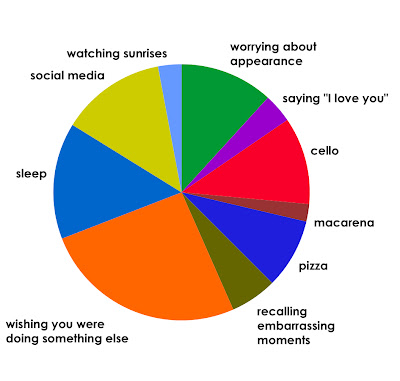 Perhaps it seems radical to appeal to my eventual demise, but really that’s the point behind everything we do, isn’t it? Even if there is a paradise waiting for me or I get to come back as another creature, I’d really like to do this current life well. I know I’d like less time worrying about things that are already in motion, that are completely out of my control. Less time looking in the mirror inspecting my flaws. More time doing good things for others. More time spent in the moment. That little glimpse into the future reminds me to, as Pema says, “Relax as it is.” It’s not that things are perfect or even pleasant, but it only makes it worse if you’re struggling against it. There is peace available in just about every moment, as it turns out.

So what would your pie chart look like? I’d love to do a follow up post featuring your submissions. Make your pie chart here. Send me your charts at contact(at)emilywright(dot)net.

†Ok, so there are worse things. Waking up in a sleeping bag full of bees is definitely worse. Having your beard catch fire is certainly as bad, especially if you’re a woman. God knows people stare at it enough without it being on fire. Although when you’re done you have no beard, which for some women is a bonus.