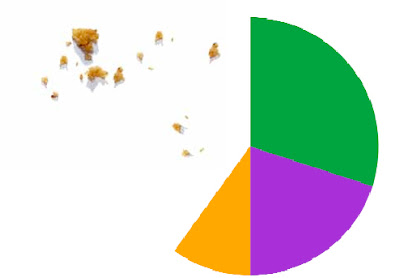 Sorry folks, I was so overworked at Hopkins this week that I ate your deathbed pie charts, mistaking them for actual pies.

They were pretty tasty! (especially Wendy’s because she and I really like food, so it made up a significant portion of the chart)

It looks like there won’t be any properly organized boot camp this summer. I needed someone else to administrate, and not too suprisingly, nobody accepted my invitation into the maelstrom. That being said, if any of the people who emailed me would like a few days of intensive lessons, I could accommodate that and probably even wrangle up another cellist or two to play some chamber music with.

How does that song go? I like New York in June….how about November? Well, I like New York so much that I’d go there just about any month, but we’re thinking that I might give a little talk on teaching some time in the late autumn in SoHo, courtesy of @Spara! Of course, most of my lectures end up as a Q and A melee, so even if you’re not a burgeoning teacher, come on by and harass me. I love it.

Last, I have a gig (thanks, Gordon!) here on August 28. I like this guy’s music and I’m looking forward to playing with him, especially at a place that specializes in good music, pizza, and ping pong. I may very well have to get there early to inspect the ping-pongery.

I heart my students