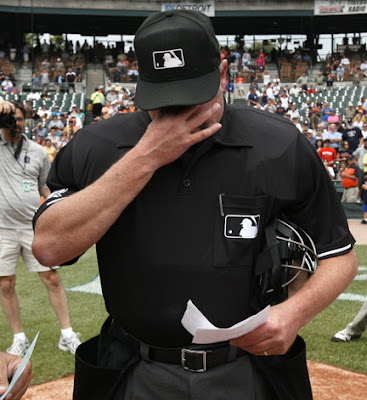 By now, most of you know who this guy is. In case you don’t, he’s Jim Joyce, the umpire who, if you believe the media who like to speak in catchphrases, “blew a perfect game” for Detroit Tigers pitcher Armando Galarraga.

He’s my new favorite figure in sports, with Galarraga close behind in second. The grace and humility exhibited by these two in the aftermath of the epic missed call astonishes me. In a world where people seem to go out of their way to be seen as victims or jump to a defensive stance, these guys make the rest look like a bunch of whiners. Upon reviewing the tape, Joyce realized his mistake and admitted it with no preamble or qualifiers. He apologized to the pitcher, sobbing at the thought that he had cost the guy a place in the history books. (of course, the controversy makes that impossible) And do you know what Galarraga did?

He took the mound, struck out the next batter, and finished the game. Then he told Joyce it was ok and that everybody makes mistakes. On a day when he made none.

That, my friends, is what you call savoir faire.

I’m sure there’s some way I could tie all of this into the cello or music or approach, but I feel like this one stands on its own. The next post will be cello-y, I promise.

A question of priority