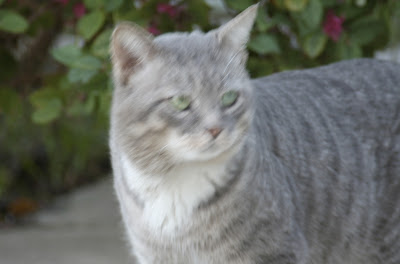 So there’s this cat. This magnificent, aloof, probably feral cat, who has gradually been slinking closer and closer to our door over the past few weeks. I immediately named him (I think him…could be her) Grey, because he is so unbelievably, totally, utterly grey. Except for his little green eyes and pink nose, that is. So we’ve been feeding him nice portions of tuna and leaving the sliding door open in the hopes of gaining his trust. Last week, as we sat in amazement, he even stepped inside and sniffed a bit. Then he marked his territory by rubbing his cheeks and chin on the door jamb, and went back outside to sit near the pool for a spell.

The next day he came by, looking like this. 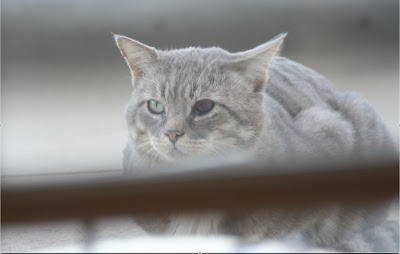 Oh no! We immediately went into sad/panic mode. Sure he’s a tough guy, but do a search for feline eye problems, and you don’t get scared when you see what a bloody eye can mean! So I looked into trapping options, found a vet who would do housecalls, and waited overnight to see what he looked like when he next appeared. In fact, Terry saw his little shadowy body run into the side yard when he arrived, and that was all we saw of him for nearly 48 worrysome hours.

And then yesterday he showed up. The photos were too blurry to post. So I’ll show you the pictures from today. 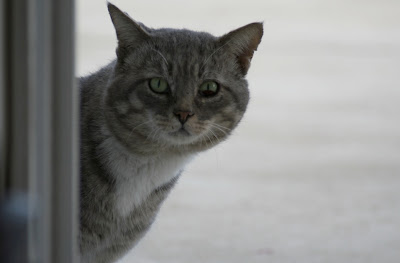 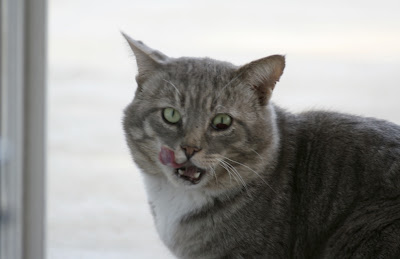 Now that is one healing eyeball! He feasted on chicken, tuna, dry food, and peed all over a catnip-laced towel we had set out for him. He came into the house to eat the meat, and sniffed and looked around before returning to triumphantly claim the rest of the neighborhood. He has this wonderful air about him, and, like any good cat, he makes it our honor to be in his presence. Like he’s royalty. Maybe he’s Earl Grey. 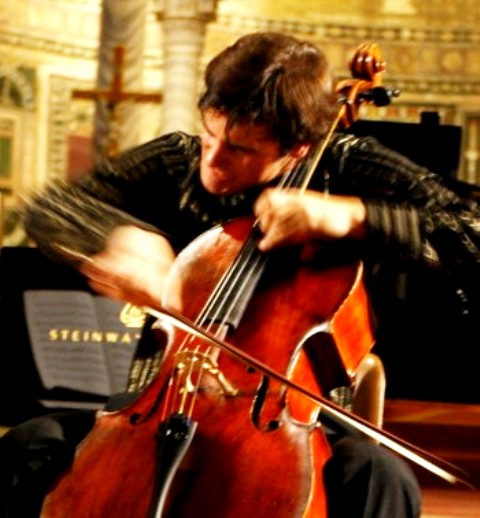 good for Pretty Boys, I guess