Warning: "continue" targeting switch is equivalent to "break". Did you mean to use "continue 2"? in /nfs/c09/h02/mnt/137743/domains/emilywright.net/html/wp-content/themes/Extra/includes/builder/functions.php on line 5000
 advice our teachers gave us, part 1 | emily wright dot net

advice our teachers gave us, part 1

Part of the reward of teaching is grafting new students onto the lineage of instructors who influenced me, and in effect, into the legacy of the instructors who influenced them. It always tickled me to hear Cathy’s tone change when she quoted William Pleeth; it seemed like she and I were both students in that moment, listening to words that changed the trajectory of her career, and in turn, mine. The same would happen when Ron, a colossus of pedagogy in his own right, would talk about Leonard Rose’s brushstroke bowing, demonstrating with a hand that might as well have belonged to the old master himself.

I do not exaggerate when I say that teachers saved both my life and my relationship with the cello. Today, I offer you some of the sage words and ideas that have made an impact on my colleagues, who continue to be a treasure trove of wit, wisdom, and support in the music community. Take a moment to truly consider what they’re saying, and why, after all these years, these things stand out to them as valuable.

“If your living environment allows, leave your instrument out of its case/uncovered so you can play it instantly whenever you have a second. Little bits of practice (even one scale done with focus and purpose) done throughout the day adds up nicely. Schedule time for ACTIVE listening to music. Not just while you’re driving or doing the dishes; that’s passive. Listen to as many styles of music as possible, and play along with recordings of all of them, even if your instrument is not on the recording. Own at least three recordings of your favorite performers on your instrument and imitate their sound. Strive for good tone on every note. Nobody cares how fast or high you can play if your sound is ugly. Record yourself playing/practicing early and often. You can be your own best teacher. Smile. You’ll feel better and no one wants to look at resting bitch face. You’ll work more if you’re fun to hang with.” -David Murray, percussion

“Scales are for learning the geography of your fingerboard. Know where you’re going and how to get home”
“Practice blindfolded”
“Don’t flick me off with unused fingers!”- Jessica Messere, cello

“Learn to play it perfectly at half tempo with the metronome before you go any faster.“ -Blake Oliver, cello

“Nobody knows everybody or everybody’s relationships. So if you’re thinking about talking smack about someone… don’t.”
“You don’t need to ask questions in rehearsal. The answer to just about every question is to listen. If you can’t figure it out by listening… Listen harder.” -Kevin Tague, trumpet

“I actually think back quite often to what Dave Warble (our conductor at the Disney Grammy College Orchestra) said to us about showing up every day to work: “Chop wood, get water.” For some reason that resonates with me on days I don’t want to be in rehearsal or practicing.” -Joshua Thomas, saxophone

“My composition teacher told me I was composing in a vacuum. That was some of the most powerful advice I ever received from a professor. Ever. So grateful. […] My early compositions were very…static. They were stuck in limbo, so to speak. I was unintentionally holding myself back by limiting myself to devices and techniques of the past, rather than allowing my own true style to come out. I was confusing style with techniques. They are completely different. Style is your fingerprint. Serial music is a technique. I was faceless, until I found my own unique voice. I’ve since escaped the vacuum!” -Ben Lemon, composer

“My dad, who was a local politician, not a musician at all, told me me “There are more politics in music than there are in politics.“- Daniel McIntosh, cello

“Go sit with the writers [of books and poems].” -Daniel Felsenfeld, composer

“Advice given to me on the subject of song composition: “Get to the chorus, and don’t bore us”. On the subject of playing live/performing with feeling: : “You think, you sink…You cry, you fly.” -Blanca Apodaca, songwriter

“When you play, you are creating your own universe of time and sound that exists only as long as you choose. Always remember that time comes before sound, so you must count before you play. Also remember that even though it is your universe, once you have made the rules, even you must obey them.” -Philip Taggart, cello

“Play with people who are better than you because you will rise to their level. Don’t be afraid to sound awful while practicing…that’s what the practice is for! I had a teacher in college who would walk down the hallways and listen to people in the practice rooms, and if they were sounding perfect he’d open the door and say “stop wasting your time and work on something that needs to be worked on.” -Meredith Kain, producer

“Focused, attentive, brief practice is better than sawing at something for hours, distracted.” -Erica Mulkey, aka Unwoman, cellist

“Be very honest with yourself when you practice. Try something that you’ve never done every day that you practice. Practice in higher positions than you generally need to play regularly.” -Kristin Gomez, viola

More coming up later in the week! Feel free to share thoughts from your instructors in the comments. Does something here especially resonate with you? 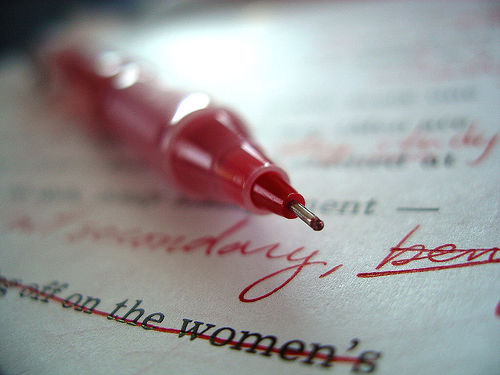