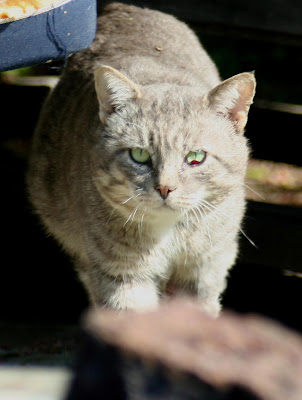 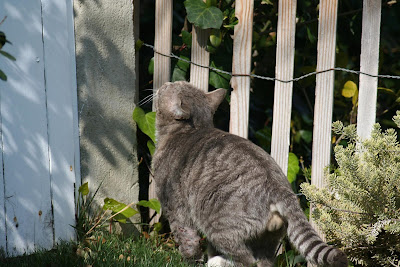 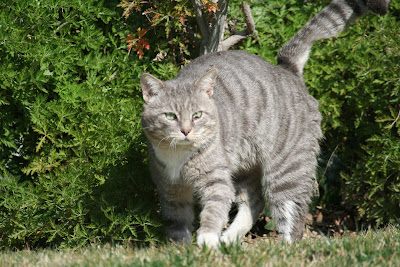 Well, you can see that the eye is doing a lot better! We can also see that he is very much a he. Good lord. I had never, ahem, seen an intact cat before. Quite shocking, really.
But now, other evidence of the hard life is apparent: there are large claw scratches on his legs, and I am lead to believe (from the teeny hand-like prints in the back yard) that our Grey Boy has been tangling with a raccoon.

So, what do you think the chances are that he would hang around if we trapped and neutered him? I know that we could do it, and that it would benefit him and the enormous feral population, so it’s pretty much a guaranteed thing, if we can snare him. But he’s so wild! I know that a lot of that is due to the fact that he is not neutered, but I wonder if any of you have experience with doing this to a cat who won’t let you touch him.

Oh, and for those of you who actually expect some cello here, I have a few notes. First, the celebrity thing is still in the works. Hold tight on that. Next, we are going to have some bow month post scripts, with updates on progress, and I have been contacted by a few people who want to submit their hands for discussion. So bow month lives on! Next, I have been doing battle with a formidable opponent: QuarkXpress 7. This is why my site has been under construction for a week or more. The thing has been completely done for 3 weeks, but I am learning the convoluted nuances of ftp, CyberDuck, and general web badness. So, sorry about that. More news in a few days, my dears….